American Society for the Alexander Technique

Marian Goldberg grasps my head gently but firmly, her hands along my jawbones. Ever so slowly, almost imperceptibly, she helps me rise from a chair in her home office until I’m standing.

That one simple movement, which I probably do a dozen times or more every day, feels slightly different this time. It’s difficult to pinpoint exactly why, but it does. 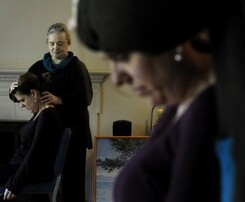 The reason, Goldberg explains, is that this time I more closely approximated the way nature intended for me to get up. I didn’t shove off with my hands after hours of slumping over a computer. I didn’t lean forward with my torso and drag my lower half out of the chair. With my head and neck leading the way, I gathered myself a little better and stood up a little more naturally, one body part following another, working together, a bit more in balance.

It’s impossible to reduce the Alexander Technique, a philosophy of movement more than a century old, to one simple rise from a chair, but at its core is a strikingly simple, easily understood concept: What ails us is the result of bad habits we’ve learned, from early in childhood, about how we use our bodies. And the best way to rid ourselves of pains in our back, neck and elsewhere is to consciously unlearn those habits.

“This isn’t treatment in any conventional sense of the word,” says Goldberg, whose Alexander Technique Center of Washington is actually in McLean. “We are re-educating.”

In that case, I’d probably qualify for remedial education. I am round-shouldered, a combination of genetics, tension and more than three decades hunched over computers, often under the pressure of newspaper deadlines. I find myself in all manner of slouches in my desk chair, unconsciously seeking a position that will allow a little more time at the keyboard. As noted here many times, I don’t have the strongest of core muscles.

None of that really matters to practitioners of the Alexander Technique, Goldberg says. Students — in the Alexander vernacular, we are not clients or patients — come to her all the time with severe back pain or posture problems, and all can improve. Some will take a handful of “lessons” and find what they’re looking for; others may stay on for 20 or 30 sessions or more as they seek additional guidance in renovating the way they move.

A 2008 study published in the British Medical Journal found the Alexander Technique to “have long term benefits for patients with chronic back pain,” and noted that six lessons followed by regular exercises were nearly as effective as 24 lessons. Goldberg charges $65 for a half-hour lesson.

She says most people feel better after the first session, as I did, though I definitely had some stiffness and discomfort the next morning. My first lesson also included Goldberg stretching me on a massage table and “lengthening” my neck and torso muscles, which reminded me of the goals of Pilates.

Repeated practice each day is critical, Goldberg tells me, so my neuromuscular system can learn new habits.

It’s not just work that imposes unnatural positions on our bodies. As children, we notice, perhaps unconsciously, that Mom tilts her head to the side or Dad dips his shoulders as he walks, and we tend to imitate them. In school we are crammed into small desks for hours at a time. Sports coaches teach us to gather ourselves for athletic effort. Maybe there’s a car accident or other trauma in our past.

Goldberg herself found the Alexander Technique in 1978 after she sought relief from back pain caused by an accident, not unlike the technique’s founder, Frederick Matthias Alexander. Born in Australia in 1869, Alexander was a successful actor and “elocutionist” — a kind of oratorical entertainer — when he began to lose his voice during performances. Doctors couldn’t help him, so Alexander began to use mirrors to observe himself delivering his lines.

He noticed that he held his head and neck in a way that inhibited his delivery and set out to change it, ultimately developing his core theories about proper body alignment and shedding bad habits as he made a successful return to the stage. Alexander’s work has been particularly useful to actors and musicians, and is more popular outside the United States, in places such as Great Britain.

Alexander’s technique isn’t the only one of its kind. The Feldenkrais method preaches a similar philosophy, and as Goldberg demonstrated and explained the Alexander Technique, I was reminded of the little I know about yoga.

All this bodily re-education takes time, patience and persistence, but it seems well worth it if you are suffering and have the inclination. The next time you get up from your chair, take a look at the way you move and see whether it’s time to go back to school.